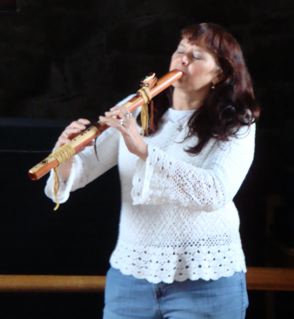 Darlene loves to travel. In 2008 we were able to go to Ireland. In this photo she is playing a flute in the a chapel located on the spot where St. Patrick planted the first Church of Ireland in 429 A.D. See the video below.

What Tribe are You?

Many people ask us “what tribe is Darlene from? Where did she learn to play the flute like that?”

Well, the Irish are sometimes called the “Indians of Great Britain”. The Irish are decedents of the Celts who were amazing flute players.

Darlene seems to have inherited that ancient gift from her ancestors and from the hand of the Creator.

As far as we know Darlene has no Native American blood, however there are relatives in her linage that could be. Only Creator knows for sure.

One thing we do know is she have a “Native Heart” and deeply loves the beauty and diversity of  the original people of this land. This is reflected in her flute playing that has been recognized and won a Nammy Award in a compilation CD called “The Color of Hope”.

At the Miami Indian All Nations Gathering in June of 2012 the Godfroy Band of the Miami Nation bestowed the tribal name of “Ehkipak Aweehseensa Nakamooni” translated as “Song of the Bluebird”.

Below is a video of Darlene playing her flute at the site of the oldest Church in Ireland established in 429 AD.

Family Cross in Clonis Ireland. The village of Clonis is where Darlene’s ancestors would have shopped.